Weaponized Fashion and the Adventures of a Queer Blackademic

I draw from a wide range of influences for thinking of how I create this idea of #weaponizefashion.  This idea of fashion as a daily praxis, both in and outside the classroom, was first modeled for me in undergraduate by one of the most dynamic professors I’ve ever met, Dr. Nancy Caciola.

Caciola often deploys the sense of history and playfulness that I find to be an absolutely important model for dressing in spaces not designed for you.  I fondly remember classes where Caciola would wear mock chainmail dresses or large glass bauble necklaces while discussing important and interrelated issues in the Middle Ages.  I wrote in my notebook after one lecture, “This is the kind of professor I want to be.”

What is #weaponizedfashion?  It’s a way of existing in the world, particularly in a world not designed for your body.  As a queer, black, fat professor, #weaponizedfashion is a way of wearing clothing that makes me even more aware of the way my body takes up space than usual.  While I am both able-bodied and a cisgender male, factors that make clothing more ‘accessible’ in certain ways, I purposefully deploy fashion as a way of calling attention to the spaces that are not designed to receive my body easily.  In thinking about #weaponizedfashion, I’m entirely indebted to the insights of the brilliant Dr. Crystal Boson and her “weaponized cuteness.”  Boson recognizes that her look is born of

choices I make when I put together my appearance. My cuteness is one aspect of the armor I put on every day to navigate my Black body in a particularly white landscape. When I say that my looks are cute, I am not grounding this in the juvenile or frivolous. My cuteness is situated in my declaration of my agency,  my Queer identity, and my investment in very specific forms of performance. I say that this look is weaponized, because I use my body and cuteness as a text to aggressively disrupt narratives that present Blackness, fatness, and Queer forms of identity as marginal, unseemly, unattractive, and unworthy.

Like Boson, my fashion is particular aware of the multiple identities I inhabit: I’m an able-bodied, cisgender black queer male in the academy, who teaches on the intersections on race, gender, and sexuality in a colonial

Honestly, it means weaponizing my fashion.  By that, I don’t mean wearing spiky things, or carrying a mace.  I mean that it is a purposeful deployment of style that borrows upon raced and gendered scripts and plays with them.  It’s a playful approach that’s still very serious about how I occupy a space that was not (and still is not) designed for or consider of bodies of color, fat bodies, or queer bodies.  It’s a sassy armor.  It’s an absurd top hat, bracelet, and a neo-Victorian black beard.  It’s brooches seen more likely as old [white] lady fashion but being repurposed on waistcoats and with top hats.  It’s being able to laugh and snarl and snark all with clothes.  Huzzah. 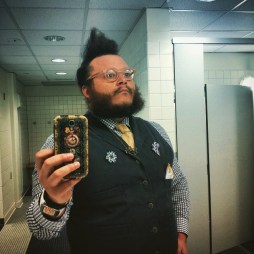